It netted the former used-car dealer several hundred thousand dollars in recent years. But law enforcement called it illegal and in August sent the 46-year-old father of four to prison for at least 4½ years and maybe as long as 40.

His business? Running a large-scale fencing operation, using a team of prostitutes, heroin users, parolees and panhandlers to steal high-priced items from local Home Depots. He then would recruit homeless people from shelters to return the stolen merchandise to a different store.

Since homeless people often have legitimate identification, as required by the store for any returns, they were given store debit cards, akin to gift cards, which they handed over to Ackerman.

Man in Home Depot fraud gets 2½ years in prison

He paid the prostitutes and drug users 20% of the value of the stolen goods and the homeless people $15 to $20 for each successful return. He in turn sold the cards to contractors and customers he recruited in Home Depot parking lots at a 70% discount.

His crews hit Home Depot (HD) stores in four Michigan counties, stealing everything from door bells to garbage disposals, kitchen faucets to drill bits. Investigators think he began running his crews in 2010 and that it cost Home Depot $600,000 to $800,000 before police arrested him in March.

“It was a pretty sophisticated scheme. ... He was a smart guy, and like all the rest of them, they think they’re never going to get caught.”

“It was a pretty sophisticated scheme,” said his defense lawyer, Mitchell Ribitwer. “A lot of the people he was using were street people and hard to trace. He was a smart guy, and like all the rest of them, they think they’re never going to get caught.”

When Ackerman was sentenced Aug. 28 after pleading guilty in Oakland County Circuit Court to running a criminal enterprise and retail fraud, the stern judge had an additional order for Ackerman upon his release from prison: Stay out of Home Depots for the rest of your life..

This is how it went down, according to police and court records.

In early 2013, loss-prevention investigators at Home Depot stores in metropolitan Detroit were noticing an alarming trend. Men, and sometimes women, usually in pairs, would enter the stores and then stuff small but expensive items in their coats, pant pockets or tote bags, then saunter through the store to the garden area — and its wide exit to the parking lot — where they would make a run for it.

A vehicle was always waiting for them, and they would escape. These incidents were caught on video.

Sometimes it was a Buick sedan, other times a Dodge Charger. A maroon Pontiac Vibe was involved.

Store officials were able to get a license plate on one of the vehicles and traced it to Ackerman’s house in Detroit. During the next several months, they did surveillance on Ackerman and followed him. He often drove different cars.

One day they tailed him for more than an hour as he chatted with people on street corners and walking the sidewalks. Eventually two got in his car. 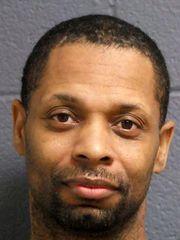 He drove them to three Home Depots and sat in the car while the pair went in, stole and then handed the merchandise over to him.

Home Depot investigators were perplexed and still not certain how the scam worked and how many people might be involved. So they made no arrests that day.

“Investigators chose not to interdict the events so as to continue the investigation to determine the scope of the enterprise and identify additional parties,” they said in police reports.

Soon, the investigators had a tracking device on Ackerman’s car and were monitoring him around the clock. On some days, he was stopping a Detroit homeless shelter recruiting volunteers to take back the stolen merchandise.

Another day, they tracked him to the St. Louis Correctional Facility, a state-run prison in Gratiot County, where he picked up a parolee who had just been released after serving time for retail fraud. Ackerman put him right back in the business of thieving.

Investigators got a break in April 2014 when they arrested a man at a Home Depot in Roseville, Mich., for shoplifting. He told them he had been panhandling near Interstate 75 when man named Adel, also known as Fats, approached and told him he would pay him to steal.

The man identified Ackerman in a photo and said he was one of Ackerman’s best workers because he “always stole more than $1,000.”

Meanwhile, the Oakland County’s Narcotics Enforcement Team was noticing a trend. While conducting drug raids on homes, they were finding Home Depot gift cards apparently being used as currency for drug trafficking.

They contacted Home Depot and joined the investigation. It appeared that Ackerman was sometimes awarding his best workers with both cash and store cards.

“It is much more organized and has a deeper impact in the community, contributing to other crimes, like drug use. We’re battling this all over the country.”

In early 2015, investigators recruited confidential informants, wired them up and placed them at the curb in front of the homeless shelter. Ackerman took the bait, and investigators listened in as he explained the deal: He had bags of merchandise with tags but no receipts.

Under Home Depot policies, anyone could return the items if the person showed identification. Without receipts, the store would provide a gift card with the amount of the items on the cards.

By March, detectives finished the investigation and arrested Ackerman as he was pulling out of his home. A search of the home found $6,000 worth of Home Depot merchandise, including batteries, screwdriver kits, levels, electrical breakers and chainsaw blades.

Some of it was already in new Home Depot bags, ready to be returned for more gift cards.

5 of the worst company policies of all time

“The investigators here did a great job of pulling this all together,”  said Paul Walton, Oakland County chief assistant prosecutor.

Home Depot officials said such scams hurt not just their business but the community.

“This is an example of what people might think is shoplifting,” Home Depot spokesman Stephen Holmes said. “In fact it is much more organized and has a deeper impact in the community, contributing to other crimes, like drug use. We’re battling this all over the country.

FIGHTING ORC WITH PURPOSE AND PARTNERSHIP